By Michael Lee
via FireRescue1.com

Arrival Phase
In the arrival phase, units are dispatched to a structure after a partial or complete structural collapse has occured. Initial units should complete an immediate size-up and establish command. A command post should be established from the onset as this can be a prolonged event. Arriving apparatus should be staged away from a possible secondary collapse zone and considerations for blocking off surrounding traffic should be considered to reduce vibrations and interference with incoming resources. Command should consider instituting Level 2 staging procedures immediately, while the management of emergency and civilian traffic is critical.

You should assess for and order resources early. If it is later determined that the additional resources are not needed, command can return these units to service. In addition, assess the need for outside heavy equipment early and request mobile cranes, front–end loaders, etc., with large capacities. In addition, consider early activation of local USAR resources if required.

Command should do an immediate hazard assessment — and then confirm it by appointing a Safety Officer to perform another size-up. Among the hazards associated with structural collapse are the potential for secondary collapse, explosion with fire due to broken gas and electrical lines, falling debris and a toxic atmosphere.

These hazards mean that safety and utlilty groups should secure hazards as soon as possible, including shutting off gas, electricity and water. If it is not possible to secure all hazards, Command should notify all rescue personnel operating on scene of the hazards present. Unless strong control of the incident is gained quickly, things can easily escalate out-of-control.

Surface Rescue Operations
Initial on-scene units should be directed in rescuing victims that can be seen on the surface and it’s vital that rescuers are aware of all the physical hazards present at the scene of a structural collapse.

While the initial rescue of surface victims is going on, Command should establish a perimeter around the whole site and keep all incoming civilian personnel out of the immediate area. Those civilians already operating on site — and believe me, they will be there — prior to your units arriving should be assessed for effectiveness. If they can be used safely, try and outfit them with safety gear — helmets, gloves and goggles. If it appears they are inneffective or too emotional, remove them from the area for the safety of everyone.

After initial surface victim removal has been completed, Command should ensure that all personnel are removed from the collapse site. This will allow for the removal of all civilians and the regrouping of rescue personnel so that a specific action plan can be instituted for the search and rescue of remaining trapped victims.

It’s at this time that Command should order a situation report from area officers. Members previously operating in the collapse structure should be quickly debriefed as to building lay out and possible location of victims. After all personnel have been removed from the collapse site, Command should establish structure triage teams. These may include structural engineers and/or personnel that are specifically trained in the recognition of structural collapse.

During the initial stages of a campaign operation, Command should attempt to ensure that there will be roadways into and out of the collapse site. This may include establishing liaison with the police department and having it reroute all traffic well around the collapse site. Also, victim staging areas should be established by creating a Medical Group or Branch based on the anticipated number of resources anticipated for establishment of triage, treatment and transportation needs. An area should be established away from the hazards of the collapse to account for, treat and transport victims.

Interior Rescue Operations Phase
First, only those personnel qualified to perform structural collapse stabilization and void access with shoring should be assigned to interior search/rescue teams. A specific action plan should be made for the search and rescue of the remaining victims, with this plan being distributed to all rescue personnel operating at the collapse site.

Prior to beginning search and rescue operations, Command should create specific search teams. These may include personnel with technical search equipment (i.e. acoustic, fiber optic, video, etc.), dog teams or personnel using the hailing (call-out) method of searching for victims.

After the building triage teams have completed evaluations of buildings, the search teams can then enter them. These teams should use standard building marking system (FEMA marking system) after the structure has been searched. If building triage teams determine that the building is structurally unstable, the search and rescue team should not enter until appropriate shoring and stabilization has been accomplished.

In a building that has been determined to be unsafe by the building triage teams, rescue teams should not attempt rescues. These teams should follow search teams that have searched previously triaged buildings and should consist of at least two trained team members. They should also have access to at least one HazMat Tech with air monitoring equipment.

If at all possible, rescue teams should attempt to gain access vertically; the horizontal breaching of walls should be done only if there is no other means to reach the void space that victims may be trapped in. Horizontal breaching of a load-bearing wall may precipitate a secondary collapse of the structure but the potential for secondary collapse can be reduced if the rescue team breaches structural members from above or below. Prior to breaching a structural load-bearing member, a specially trained structural collapse specialist should approve and oversee this operation. If the atmospheric conditions are not known in the room of desired entry, a pilot hole should be punched to monitor to it prior to the beginning of breaching operations.

If a victim is located, the rescue team should treat the area that they’ve been found in as a confined space and followconfined space rescue operations guidelines. The rescue team leader should designate the proper method of entry into the space and ensure the safety of the entry rescuer. All spaces must be monitored for flammable, toxic and oxygen deficient atmospheres before entry is made.

Once the rescue team has made contact with the victim(s), an immediate assessment of the victim(s) needs to be carried out. One thing to remember is the effects that lifting objects off the victim can have on them (Compartment Syndrome). The safest and most effective method of victim extrication needs to be determined, with the rescue team leader ensuring the safety of the extrication process. Once the victim(s) have been removed to a safe location, they should be transferred to the Treatment Sector for continued ALS care.

After all located victims have been removed from the building, the rescue teams should pull ou” of the building and update the marking system. Rescue teams should keep in mind that any cribbing and shoring should be left in place as the removal of these systems could precipitate a secondary collapse.

Selected Debris Removal Phase
If rescue teams have not been able to find victims through other methods, then they should try to be located by removing debris. If there is a potential for live victims, teams must be very careful when removing debris so as not to cause a secondary collapse or further injury to the victim(s).

If a victim location is known, either from family members or previously rescued people, an attempt should be made to remove debris to reach that person. In lightweight frame construction buildings, this can be accomplished by cutting and hand-removing structural members. This may also require the use of a crane to pick and move the structural components to reach potential victims. Rescue team members should assist in the break-up and removal of structural components.

During all of these operations, a safety officer should be overseeing things to ensure site safety for all operating personnel. If structural components are removed from the site, they should be marked in some way so they can be identified – which building they came from, etc., — for future investigative/forensic purposes.

As debris is removed, all operations should be stopped periodically to search (acoustic, dog team, hailing) for victims. After enough debris has been removed to reasonably ascertain that there are not any victims, search and rescue operations can then be suspended in that building.

General Debris Removal Phase
Prior to beginning general debris removal, Command should call for a situation report to establish victim survivability — remember life is lived by the rule of 3’s; 3 minutes without air, 3 days without water and 3 weeks without food. If it has been determined that no victims can be found alive in the building, a general debris removal can begin. Should there be a potential for deceased victims to be trapped in the rubble, removal crews should be alert for signs of them.

During general debris removal, if heavy equipment operators spot a sign of a deceased victim(s), a selected debris removal can be conducted in order to remove them respectfully. The coroner and/or other investigative personnel should then be notified to authorize the removal of the body(ies). As debris is removed, each dump truck load should also be marked as to the general area found and final location of the debris, which will help investigators complete their forensic analysis.

Prior to termination of the incident, Command need to account for all personnel that have been operating at the collapse site. Each sector officer should ensure crew and equipment accountability before returning to service. And if Command has not previously addressed the issue of C.I.S.D., he/she may consider doing so during the termination phase. After the personnel and equipment are back in service, debriefing can be carried out.

About the Author
Michael Lee has 25 years experience in pre-hospital paramedic experience and about 20 years experience in the fire service. He started as a FF/Paramedic and worked up through the ranks, including training officer, to his current position as battalion chief. He currently serves as battalion chief at Mountain View Fire Protection District in Colorado. He is currently filling the role of safety officer for FEMA USAR Colorado Task Force One and has military service in the U.S. Navy. To contact Michael, email [email protected]

Related Topics:SafetyStructural Collapse
Up Next

FireRescue1.com is a comprehensive and trusted online destination for firefighters and fire departments worldwide. Visit FireRescue1.com

A school bus had struck a pedestrian and ran into a building. 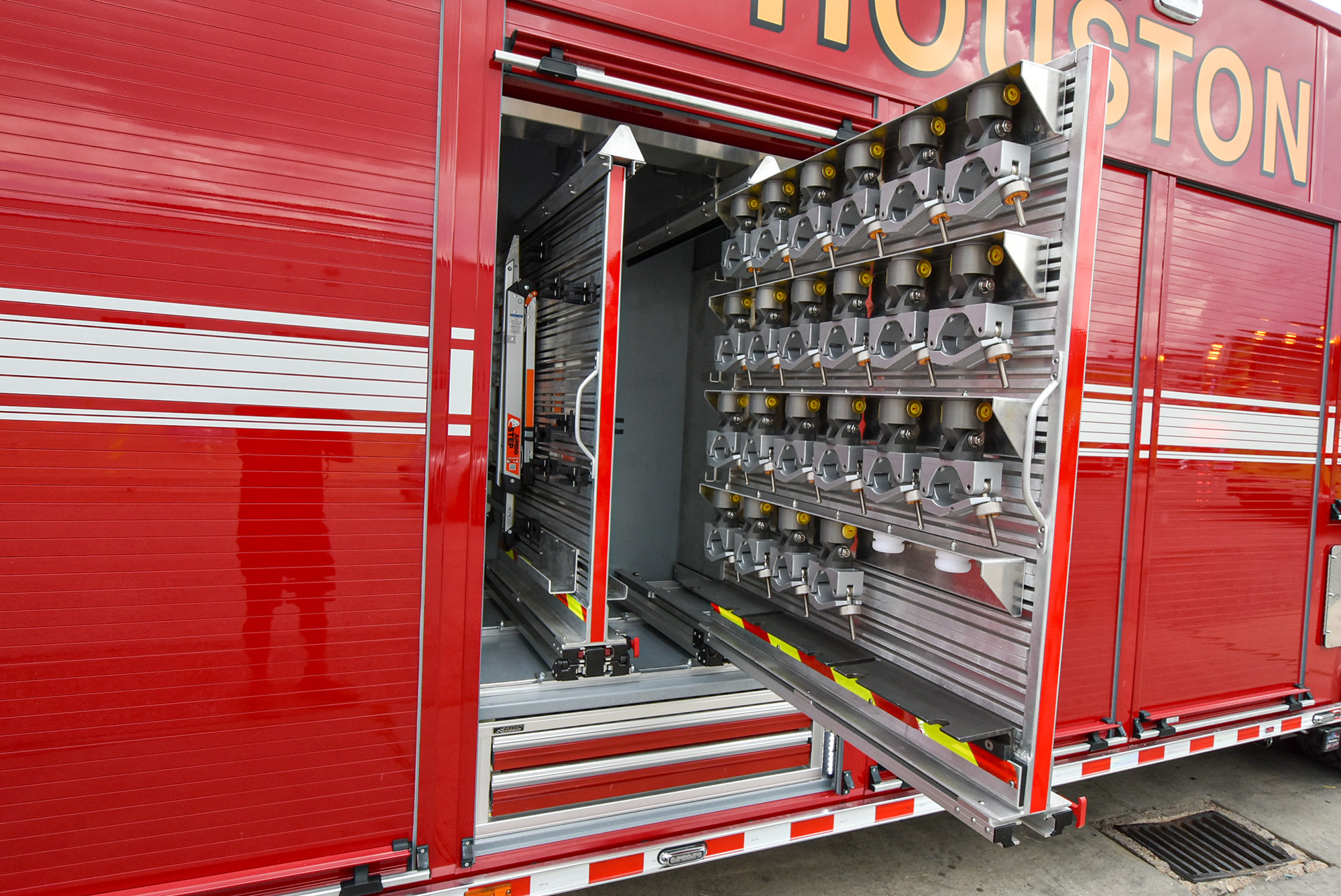 Report of a garbage truck had crashed into a structure.