One can get easily overwhelmed by the technicality of rope rescue or can simply avoid some of the more in depth engineering principles. However, we should push ourselves to understand and appreciate the major role that these theories play in becoming effective technical rescuers and in constructing and using well-designed systems and practices.

Angles can be identified and analyzed everywhere within rope rescue systems. These angles can cause systems, anchor points, hardware and software to become overloaded. They can also allow systems to be operated or hauled and lowered with efficiency and minimal force or with inefficiency and force multiplication.

This means that angles should be used to our advantage to insure that rope-rescue systems are constructed safely and efficiently. The most interesting thing about angles is the two basic concepts that can be viewed as opposing theories. The attached video provides a visual explanation of both theories.

Theory 1
The first theory deals with what’s commonly referred to as the critical-angle concept. This requires rescuers to understand that a load applied in a perpendicular fashion to a straight line will multiply the forces applied to that line, particularly where the ends of the line are attached to objects.

As the line vectors towards the load or extends towards the load, forming increasingly narrower Vs, the force multiplication decreases. Let’s give this theory some specifics to further explore it.

This continues to progress until a maximum of 180 degrees is achieved. At this point, the load on each end will exceed the load itself resulting in a total load that is greater than the twice the actual load.

Extreme angles like this will overload systems and result in catastrophic failures. There are some advanced rigging concepts that can be implemented when these types of angles are needed, but that is for another discussion.

Theory 1: Application
On a basic level, this should be consistently analyzed and applied when placing anchor material on anchors. For example, when wrapping an anchor strap around a tree, the interior angle that is formed when the rings of the anchor strap are brought together, should never exceed 120 degrees.

We encourage rigging that maximizes workspace but allows the narrowest possible interior angle to reduce force multiplication to the anchor system. On an advanced level, guiding lines and high lines are often tensioned to the critical angle arena.

Rescuers must apply more advanced tensioning techniques and engineering calculations to insure that system overload will not occur. This is usually accomplished by adding track lines to help carry or minimize the load applied to each line.

In this application, the lines are much like the straight line example used earlier and the interior angle is the angle which is increased or decreased depending on the degree of tension or slack applied to the line(s).

Theory 2
This theory, an oppositional theory, concludes that wide angles are good and narrow angles are bad. It is commonly referred to as pulley forces. And whatever comes into a pulley must come out of a pulley.

In other words, if I have a 300-pound load, and attach a rope to it and run that rope through a fixed pulley as a change of direction, I must apply 300 pounds of force when I pull on the rope to move the load. This also results in 600 pounds force being applied to the anchor that the pulley is attached to.

This basic theoretical perception changes pretty dramatically with a little angle alteration. When the interior angle of the rope coming into and out of the pulley is between 0 degrees and 45 degrees, the force applied to the anchor is about 2 times the actual load.

This is a general guide that has a more specific range to it but provides a good field tool.

Theory 2: Application
Rescuers should use this theory anytime they rig in directional pulleys, particularly when using marginal anchors. Choose directional anchors that are close enough to the line, or direction of pull, that they apply a wide interior angle to the system. This creates a more efficient system that may require less mechanical advantage for hauling and apply less stress to the overall system and to the lower haul team.

On a more advanced level, floating anchors or directional pulleys that can be altered in their position by attaching ropes that travel through descent-control or progress-capture devices, allow rescuers to open and close angles as needed based on their analysis of the system.

Although this may seem a little heady, the result of applying angle theory to your system construction and management will result in a much safer and more efficient operation.

The dynamometer
Dynamometers are tremendous assets to high-angle rescue teams. In the past, they were often too bulky and finicky to be practical field tools, but new versions that are extremely field friendly, compact and rugged.

CMC is now offering a small dynamometer with double swivels and a digital readout for peak forces and working forces. This device is no bigger than a brake bar rack or other pieces of hardware in our inventories.

This allows rescuers to use definitive data when performing rescue operations as opposed to theoretical practices that are proven in the lab, but manifest significant variables when applied in the field. The corresponding video illustrates both of these theories out in the field.

Train hard and I encourage you to put these two theories into your high angle rigging toolbox.

High-Angle Rescue: How to Execute Mid-Height Pick Off 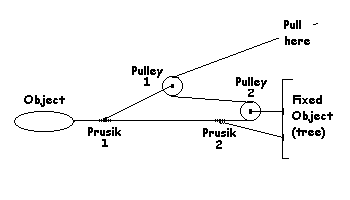